What Is the Best Mexican Grilled Chicken? 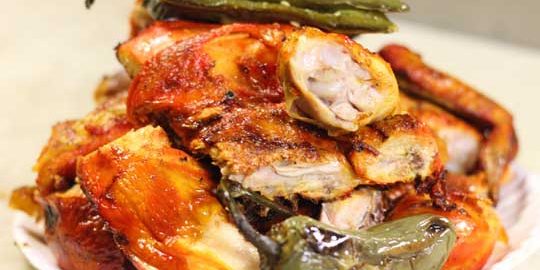 Mexico is filled with delicious food, and grilled chicken is no exception. In this post, we discuss some of Mexico’s yummiest grilled chicken — Even though, as you might have guessed, we have a clear favorite!

What Is the Best Mexican Grilled Chicken?

Grilled meat is consumed all over Mexico, but in Northern Mexican states like Nuevo Leon or Coahuila, grilling is an art and a social event all rolled into one.

With this background in mind, it’s easy to see why some of Mexico’s most delicious grilled chicken styles are found up north, in arid states where outdoor grilling is a natural choice. However, there are some proud exceptions, like Michoacán or Veracruz.

The secret to great grilled chicken Sinaloa style is all in the marinade. The chicken is left overnight to soak in a mixture of orange juice, white vinegar, and spices like oregano, thyme, laurel, pepper, chile guajillo, garlic, onion, and salt.

Michoacan is not a northern state (it’s located in west-central Mexico), but it has a thing or two to say about grilled chicken.

In addition to being a really picturesque enclave, the lakeside town of Pátzcuaro, Michoacán also boasts some delicious grilled chicken. Here, the whole chicken is cleaned, cut open, marinated in a sauce made with orange juice, lime juice, pepper, and spices, and then grilled on a stick, ensuring uniform crispiness.

We don’t mean to toot our own horn but at El Pollo Norteño, we believe that we serve the best Mexican grilled chicken. Depending on where you eat your chicken in Mexico, some places emphasize a special type of charcoal, while others make a big deal of their marinade.

Well, at el Pollo Norteño, we have both. We prepare our chicken with a secret northern Mexican marinade and then grill it over real mesquite charcoal. The result is unforgettable, and finger-licking good!