What Kind of Bread Is Used in a Torta? 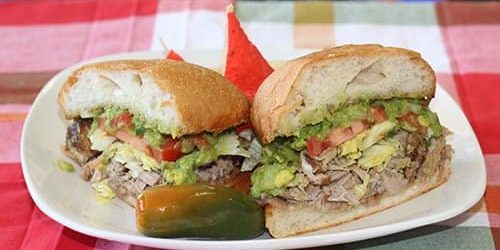 As with any other sandwich, the type of bread you use is one of the factors that can make or break a torta. Keep reading to discover what kind of bread is used in a torta and learn more about popular types of bread in Mexico.

What Is a Torta in Mexico?

First, let’s make sure we are all on the same page by talking a bit about Mexican tortas. This is important because in other Latin American countries “torta” means “cake”. But not in Mexico.

In Mexico, a torta is a sandwich made with soft bread and filled with ingredients that may include ham, grilled chicken, breaded chicken, lettuce, wieners, avocado, salsa, tomato, carnitas, or beans.

Tortas are extremely popular in Mexico because they are convenient, easy to make, and usually inexpensive.

The sandwich is etched into Mexican pop culture thanks to El Chavo del Ocho, one Mexico’s most popular TV characters ever, who is known to crave tortas all the time.

What Kind of Bread Is Used in a Torta?

While there are different types of tortas in Mexico (such as tortas cubanas or tortas ahogadas), when Mexicans talk about tortas, they usually refer to a sandwich made with a specific type of bread known as telera.

A telera is soft, oval bread made with wheat flour. Teleras are easily recognizable because they have two lengthwise slices that divide the surface of the bread into three lobes.

Teleras can be found all over Mexico but are particularly popular in Mexico City and central states like Tlaxcala, Puebla, and Morelos.

In other states, like Jalisco or Guanajuato, the go-to type of bread is birote, a type of sourdough bread with a crunchy crust and a soft center.

While tortas are typically made with a telera, a sandwich made with a birote is known as “lonche,” a word taken from the English “lunch.”