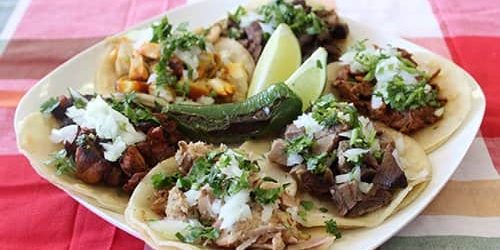 Tacos are an endless source of enjoyment, both on the table and as a topic of conversation. From the most basic type of taco to Salma Hayek’s favorite breakfast taco, here are three fun facts about tacos you probably didn’t know.

The Most Basic Type of Taco

If you had to venture a guess, which would you say is the most basic type of taco? If you answered “a re-fried beans taco,” congratulations: you are a perfectly reasonable person. And you are also wrong. The most basic type of taco would be a salt taco, which is just what its name suggests: a warm tortilla rolled tight with a pinch of salt inside. The next time you visit a Mexican restaurant (ideally El Pollo Norteño) try this old Mexican trick while your food arrives. You can thank us later.

It’s no secret that the French love great food. But what not everybody knows is that they have fallen head over heels for tacos. However, their enthusiasm has veered away from tradition and their take on tacos looks more like burritos on steroids. French tacos (or matelas, which means mattress) consist of big flour tortillas that are filled with French fries, cheese, and meat, and then grilled. The French version of tacos first appeared in Lyon, in east-central France, before becoming a fast-food staple all over the country.

Again: everyone loves tacos, and superstars are no exception to this rule. If you need proof, just check out this video of Salma Hayek sharing her favorite breakfast taco recipe.

What deserves to be known as “Salma’s Special” is a tortilla that holds a fried egg, mushrooms, arugula, and green salsa. It’s delicious, impossible to pigeon-hole, and yet unmistakably Mexican—just like Salma herself.

Looking for authentic Mexican food to celebrate Mexico’s Independence Day in, Anaheim, Santa Ana, or Garden Grove? Then El Pollo Norteño is the place to go.